Spring migration is on and many birds are already on their way back to North America to breed. Besides many waterbirds, warblers are the ones we are on the lookout for on Curacao. These small, overactive insect eaters will occasionally visit our island on their way north, to spend some very important time on the island to rest, recharge and replenish fat reserves by looking for protein rich insects. Areas rich in insects are of course favoured by these birds, and fresh water will also be an attraction to them.

Suitable locations are often those you least expect. Such as the landscaped garden of the Renaissance Resort & Mall along the small boulevard leading from the mega pier, where cruise ships often dock, towards the Riffort Mall. Birdwatching in this improbable spot can be very exciting. The shoreline is a place where Brown Pelicans, Magnificent Frigatebirds and Ospreys will show themselves, and Royal Terns an Laughing Gulls soar the winds to perform their acrobatics. 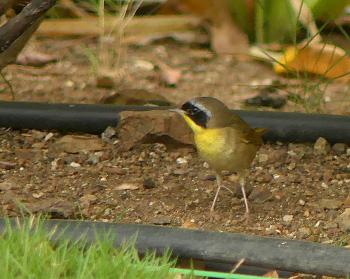 The nearby mangrove system at Rif, an area now under threat of destruction because of the governments plans to develop a straight road trough it towards the second megapier, is home to many species of egrets, Yellow warblers, waders and parakeets. And also houses migratory species like warblers (Northern Parula, Northern Watertrush and Blackpoll warbler, and the Belted Kingfisher, a bird which often will fly around the shore of Renaissance towards the calmer inner harbor.

But it was of all places, the grassy landscaped area of the Renaissance Resort, where colleague birder Rob Wellens of Curacao Backyard Birding who discovered the Common Yellowthroat in between the dozens of franticly flying Bananaquits. A LIFER bird for us all. The very next day we made sure to be at the garden again in the morning hours to see if we could capture some more shots of this elusive and quick-footed bird. And we did.

Common Yellowthroats ( Gewone Maskerzangen [Dutch] – Maskarita komun [Papiamentu] – Geothlypis trichas) are small, only about 12 cm long. Especially the males, one of which we saw at Renaissance, are beautifully coloured with a bright yellow throat, a deep black mask and brown on top. As the move very fast it will easily be confused with the Bananaquit colour variation we have on the island of Curacao. The books describe its wren-like behaviour and indeed this is spot on. It moves so quick that you will have to predict its movements to be able to take a decent shot.

On Curacao this is a very irregular visitor with only 2 records known.